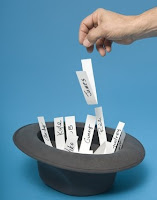 The jolly holiday of Purim on March 8, 2012 shares something very special with the holiest day on the Jewish calendar – Yom KiPurim, to the point, that our sages tell us, that Yom KiPurim is similar to Purim. Purim being the superior Holiday.

When the Moshiach comes, speedily in our days, all holidays will pale in comparison to the happiness, bliss and G-dliness that will shine in those times, with the exception of one Holiday, Purim. Even then, the celebration and recognition of the day, will stand out in its supreme joyfulness.

Besides the fact that within the name of Yom KiPurim are the letters of the Holiday Purim, the essence and practice of both days share something in common.

Normally, when a person needs to make a decision they approach the options available by weighing the benefits versus the disadvantages for each of the selections available. When a person depends on lots however, his approach is certainly not rational. He/she is leaving it up to forces that are beyond the scope of logical thinking. Both Holidays, Yom Kipurim and Purim, have Lots, in common.

Higher and deeper, is a relationship that surpasses the finite boundaries of human intellect. I am bound and committed, totally, with the essence of my being. Whether I can understand or make sense of it or not.

Yom Kippur is a day of atonement, because, it is precisely this aspect that is drawn out on this holy day. On Yom Kippur everyone goes to a synagogue and is praying and fasting. The essence and deep core within, the soul itself, devotes itself, and renews its bond with the Almighty G-d. As a result, G-d reacts in line, notwithstanding the deeds of the past year by forgiving the past and once again looking in favor to that individual to grant a year of health and blessings. All this, is brought about through intense prayer and fasting.

However on Purim, while the wicked Haman counted on the supra-rational forces to destroy the Jewish people, hence the casting of lots to determine which day he would exterminate the Jewish people, in an incredible unfolding of events, that surpassed anyone’s imagination, the Jewish people where miraculously saved. The relationship between G-d and His people expressed itself in the most fantastic way and is celebrated by eating and drinking.

On Purim, the bond between Holiness and people doesn’t just express itself by being spiritual, by being in a holy place and by acting angelic. On Purim, when our physical lives were saved, we eat a special meal, and trade gifts of food with each other and offer gifts to the poor, because the effects of the day permeate and are felt even in mundane and ordinary matters. Purim is a day of incredible joy and happiness.

Joy breaks all personal limitations. When a person serves out of a feeling and emotion of joy, dancing, singing, drinking, eating, he takes the essence of his core, the entire broad spectrum of his soul, and connects all of himself, with G-d. “All my bones will say, who is like you, oh G-d.” When a person is truly happy about his relationship with G-d, it knows no bounds, and brings about the greatest blessings from G-d in his life.

Posted by Kosher Caffeine at 12:32 PM