To surrender oneself before G-d. The Ultimate strength and courage to be a King. 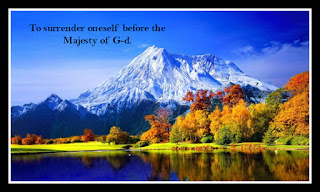 “You shall place upon yourself a King.” Deut. 17:15.  In fact, the Torah designates every person as a king! Kol Yisroel Melachim Haim. Zohar.  The role of every King, is to rule over his very own “small world”. To take responsibility of his/her own life in the ongoing war and struggle that starts from the moment of birth, of the good inclination over the evil and bad inclination. To gain ground, conquer, and take control over his “small city”.

According to Jewish law, a king must be anointed by the special oil prepared by Moses.  So the next natural question is, how can every person be considered a king? Every person was not anointed with this special miraculous oil?

The rule is also, that the child of a king automatically takes over the throne from his father. Now, since each person is like an only child to our Father in heaven – G-d, the kingship is automatically passed to each and every person – the only child to G-d.

However, how can anyone suggest each and every person is like an only child when in fact there are so many others in the world?

The answer is that we are talking about G-d. Parents undoubtedly will have a very different type of mentality and emotions towards an only child or a child who is one of many. When it comes to G-d, the Holy Baal Shem Tov taught, “the love G-d has for every single person is infinitely greater than the love of an elderly couple who gave birth to an only child in their old age.”  G-d in his infinite possibilities has that type of infinite love towards each person as if there was no one else but him.

We are still not there yet explaining the special relationship each one of us has with G-d, being considered a King and an only child.

Since G-d is forever as the verse says, “You and your years never end …”, He, is above and beyond the concept of time itself, how can anyone ever inherit anything from Him? G-d never ends and has no ending, to pass anything over to someone else?

When it is written in the Torah the land of Israel is an inheritance for every Jew, the intention is not an inheritance from our forefathers Abraham, Isaac, and Jacob, but that every Jew no matter where he finds himself is granted a claim to the land, “an inheritance to the (entire) congregation of Jacob “, granted by G-d Himself.

The inheritance, is our claim granted by the infinite G-d to each and every one.

Those who study the wisdom of G-d in the Torah --  the most powerful energy of G-d granted to the universe, they are the true rulers and kings over this world. The study of Torah is not limited to any one group but as the Rambam writes, every Jew is obligated to study the Torah. Therefore it follows every person can study and actively become that king with the very real power to rule and conquer successfully their “small cities”.

This awareness that every person is a King,  grants every person in his spiritual service to G-d the determination and the very real courage to face and stand up to the struggles, temptations,  and machinations of the evil inclination.

This awareness and the strength it brings with it will never lead to arrogance because, he knows this is a strength exclusively granted by G-d and is not a power that is self-generated from inside himself. Jewish law says, even a King must stands like a servant, before G-d.

It is necessarily because he is humble and surrenders himself before the supreme kingship of G-d from whom he knows he is receiving all that strength he can fulfill “do not be afraid before any human being.”

Mindful that his title as a king is not about his own existence and identity, but that he is a messenger granted power by G-d, through the study and practice of the Torah and its commandments, that he carries with him the strength of the Torah - G-ds strength - the wisdom of G-d - to take on and stand firm before any challenge that he/she ultimately conquers his/her little city and succeeds to become the ruler and king over themselves.

Posted by Kosher Caffeine at 4:09 PM